Babe is finally home for a few weeks. Whenever he’s home for an extended period of time, he enlists the help of a few friends to help him get things done around the house. In exchange for all their hard work, it’s only fair that I serve them a good meal. This time it’s chicken fried steak. I grew up just calling it cube steak but I’m fancy now. This dish is made up of up pan fried cube steak that has been seasoned and floured. The crispy steaks are then simmered in an old fashioned onion gravy and served over rice. Babe like to brag to everyone, “My wife makes homemade gravy.”  Gotta love him.

Here’s how you make it:

Season cube steak with seasoned salt (I like Lawry’s and actually I’ve found that the low sodium version tastes better than the original.), black pepper, onion powder and garlic powder.

Heat canola oil in a cast iron pan on medium-high heat. Dredge the seasoned meat in flour and brown steaks for about 6 minutes on each side.

Once the cube steak is browned on both sides, drain on paper towels.

Pour out all but about 3 tablespoons of oil from the skillet. Leave all the bits from the steaks in there too. That’s where are the yummy goodness is. Add 3 tablespoons of flour to the oil and stir constantly until the mixture turns into a rich brown roux. Once the roux reached your desired brownness, add a cups of cold water. Stir quickly with a whisk to keep the gravy smooth. Now add the sliced onions. Bring the gravy to a boil. Reduce the heat and cover. Let the gravy simmer for about 15 minutes or until the onions are translucent and tender. Water from the onions usually keeps the gravy from getting too thick. But, if you find that your gravy is too thick for your liking, add more beef stock 1/4 cup at a time until you reach the desired consistency. Season to taste with salt, black pepper and a dash of cayenne pepper.

Return the steaks to the skillet with the onion gravy. Submerge the steaks and simmer for another 5 minutes or so.

If you prefer to have keep the steaks crispy, just pour some gravy directly over the fried cube steak instead of putting the steaks in the gravy.

Previous post Living Remixed Gets Remixed in the New Year 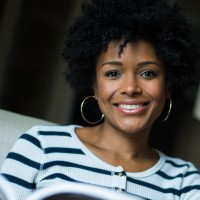 An online resource for those who want to enhance their everyday life through food, entertaining and travel. It's your life, AMPLIFIED.
2,739
followers
0
fans